Referred for a preliminary ruling, the Court of Justice of the European Union interpreted, in a judgment of 9 July 2020, Direktor na Teritorialna direktsiya Yugozapadna Agentsiya “Mitnitsi”, case C-76/19, Article 32-1-c of regulation (EEC) 2913/92 establishing the Community customs code (“CCC”), relating to the conditions for reintegrating royalties and license fees into the customs value of imported goods. Although the CCC is no longer in force, the reasoning of the Court remains fully relevant for interpreting the customs valuation rules of the Union Customs Code (“UCC”), applicable since May 1, 2016. 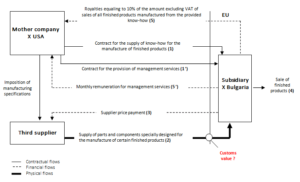 The question was twofold:

First comment, the Court of Justice clearly affirms that royalties paid in return for the supply of know-how for the purposes of manufacturing finished products in which the imported goods are incorporated, can only be analyzed with regard to the single Article 32-1-c  of the CCC. Important reminder, which could slow down certain attempts (by customs administrations) to requalify, for customs valuation purposes, the fees paid in return for know-how into engineering or R&D costs. In the latter case, the royalties are analyzed on the basis of Article 32-1-b-iv of the CCC, without assessment of the relationship between the royalties and the goods as well as the conditionality of their payment for the sale for export to the EU.

On the relationship between the imported parts and elements and the royalties, the Court makes some interesting developments. After recalling that the method for calculating the royalties is not a relevant element in assessing this relationship, the Court held that the mere fact that a good is incorporated into a finished product is not sufficient to conclude that the royalties, paid in return for the supply of know-how for the manufacture of this finished product, relates to the latter. The relationship must be tighter. It is for example the case where the know-how provided under the license agreement is necessary for the manufacture of the imported good, which is for example, established when the imported goods are specifically designed to be incorporated into the manufactured finished products on the basis of the licensed know-how, without any reasonable alternative use being considered.

With regard to the payment of these royalties as a condition of the sale for export, the Court continues in line with its GE Healthcare judgment of March 2017, adopting an extensive interpretation, based, not on the content of the contracts signed between the licensee and the licensor, but on the balance of power between the parties involved and the commercial dominant position of the licensor,. Thus, even if the contract for the provision of know-how signed between the two companies of the same group does not mention the supply of imported goods, or if that same contract does not specify that the payment of the royalties is necessary for the supply of these parts and elements, the fact that the licensor controls the production chain until the sale of the finished products, is sufficient to recognize this condition of sale. By focusing more on commercial reality than on the legal relationship, the Court follows in the footsteps of the European Commission (Guidelines on Customs Valuation) and the WCO (see for example, comment 25.1 TCCV). In contrast, it differs from the case law recently established in several countries, including the United States (see for example, US CIT, Trimil SA v. United States, December 17, 2019).

In the end, the Court counterbalances a restrictive approach on the concept of relationship between royalties and imported goods, by an extensive interpretation of the condition of the sale. Will this give hope to operators who see, in the drafting of the UCC customs valuation rules, a mechanism implying automatic integration of royalties into the value of imported goods? The Court thereby confirms that it does not tolerate such automatism.

This judgment, without marking a break with existing law, allows the Court to refine its interpretation of the two cumulative conditions for reintegrating royalties into the customs value of goods, in the context of recent changes in the applicable rules introduced by the UCC.

The Customs and International Trade team of DS Avocats is at your disposal to provide you with any additional information.